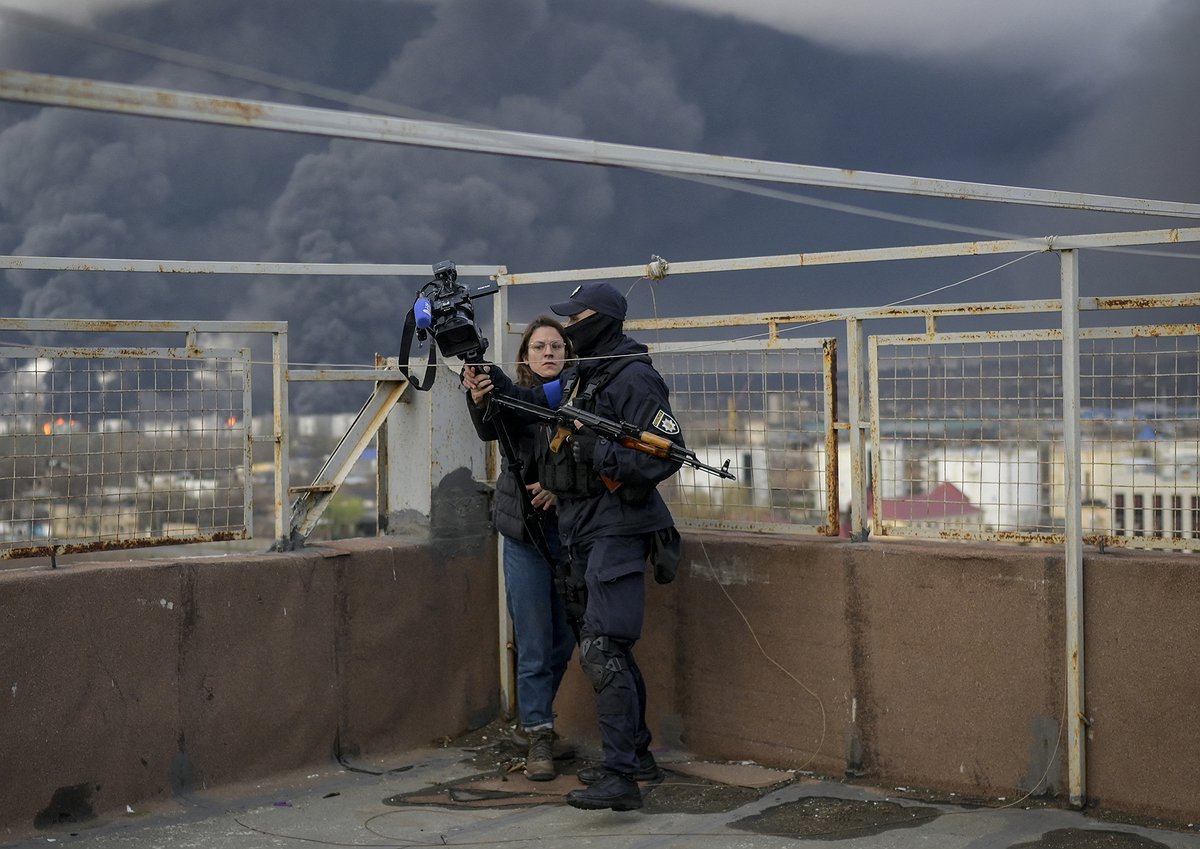 I’d just returned to the UK from a four-week trip to Afghanistan and was ready for some down time. That wasn’t to be. Russia was about to invade Ukraine, so within 36 hours of getting home I was on an early morning Wizz Air flight from Gatwick to Kyiv carrying more than 250 kilos of ballistic vests, helmets, medical kits and other safety equipment.

The quick turnaround was needed as I was responsible for getting multiple Sky News teams into Ukraine safely and setting up our operational security hub to bolster our coverage across the country.

Although Sky has robust risk management processes in place, some of the most competent journalists in the industry and a well-resourced security and safety set up, the threats were changing almost every day, sometimes every hour, in the early days of the conflict. There were curfews to navigate, changes in press accreditation procedures and new laws about what we could – and couldn’t – report on.

What we hadn’t counted on, less than one week into the war, was that we would have already had three significant incidents, all in quick succession. The most serious involved our team being ambushed, two journalists shot and their vehicle rained on by a volley of small arms fire. Our people involved in the now-infamous incident on the E40 road, the main route into Kyiv, were extremely fortunate to escape with their lives. Camera operator Richie Mockler took two rounds to his body armour and chief correspondent Stuart Ramsay was wounded.

While they were certainly lucky, there were other factors that saved them. The team was well trained, experienced in conflict zones and continued to communicate throughout the ongoing crisis. In the unsettling video of the attack, you can hear them talking to each other throughout. This competence to operate in areas of conflict, combined with having effective risk management in place, may have been the difference between them being alive and dead.

Having a pre-established vital link between the team on the ground and the security and management teams back in Kyiv was crucial. The first call producer Dominique Van Heerden made after the incident, at around 16:15 on the 28 February, was to me back in Kyiv. The call set off a chain reaction of events that made for an extremely stressful and testing 24 hours for all involved, especially for our team on the ground. Until we could arrange a suitable and safe evacuation from Stoianka, the area where the attack took place, they had to hunker down in a makeshift secure location and were forced to take cover from both artillery and an ongoing small arms firefight.

To assist me in evacuating them to a place of safety, I was supported by our local producer, Azad Safarov, our head of news back in London, Tim Singleton, and our in-country editorial lead Ed Brown. This would form our very own incident management team to ensure clear, concise and accurate information flowed both to the team on the ground, but also to leadership back at headquarters in London.

Over the next 27 hours, we moved them to three different locations and coordinated with our security advisor deployed with the team, the Ukrainian police, the Secret Service and a government spokesperson, all while managing logistics and medical support for when they arrived back at our hotel in Kyiv. Again, this was no easy feat considering the majority of medical facilities were closed due to the state of emergency.

Ultimately, the interactions showed that having trust and effective engagement in the risk assessment process at all levels, but especially positive engagement by the deployed teams, was a crucial factor in a somewhat positive outcome. Without this link between the team on the ground and security, we would have been unable to bring in the right resources to pull them out of danger.

Anecdotally, and based on my own research, many journalists often feel that the risk assessments can be seen as overly restrictive, hamper creativity and seem like they are bringing their competency into question. However, the engagement on this occasion demonstrated how risk assessments are of significant value. News organisations must leverage experienced staff members who have benefited from and understand the risk assessment process to bring about a change in attitude within their own organisations and across the industry. As security professionals, we don’t ever want to deal with these situations, but when they happen it does cement the need for robust, yet flexible, risk management practices. For me, it needs to be engagement with risk assessments over reluctant compliance every time.

This is especially true in Ukraine which is a conflict unlike any our teams, who are veterans of war zones, have covered before. Though Iraq and Afghanistan were brutal wars where journalists lost their lives, both local and international media covering Ukraine had died in unprecedented numbers only weeks into the conflict.

Although most organisations have robust plans to deal with crises, risk management is an element of journalism that hasn’t really been academically studied, with most learnings coming through the experiences of journalists themselves. This was my main motivation for embarking on the five-year research project that became my thesis. It focuses on the risk management practices employed by news organisations in support of journalists operating in areas of conflict. While the study was conducted prior to the Ukraine conflict, there were key findings that certainly hold true for this war, notably:

Back in the early days of the Ukraine conflict, many of my fellow security managers told me they were having the same issues keeping their teams safe. The fast pace of this war was like no other they’d seen. Among the dangers were the increased risk of indirect fire, concerns about the availability and level of ballistic vests used by news teams and well-armed civilian militias defending their homeland, some of whom were not at all friendly to the media.

Now known as the National Defence, the government gave civilians over 20,000 weapons to fight the Russians. Most had little or no training and were creating an unexpected risk to our teams. These weapons were frequently issued to people with no experience, in remote areas, and some could not tell the difference between a van marked 'PRESS' and that of a Russian forces vehicle with the letter 'V'. Many of our journalists moving across Ukraine were harassed and poorly treated, with one team pulled from their vehicle at gunpoint and roughed up.

Another critical risk has been indirect fire. This is a risk in any conflict, but in Ukraine it feels closer somehow. Indirect fire is harder to avoid, with many more near-misses due to shrapnel fragmentation. Deciding if the risk of covering a story and possibly being hit by indirect fire is worth the reward is an often-difficult topic to raise with journalists. Having frank and open conversations early on was the only way we could ensure teams could operate freely, while also ensuring there was an appropriate level of risk mitigation across our coverage.  It is vitally important that news organisations capture critical lessons learned throughout these and future conflicts by recording data and experiences from war zone deployments as part of the risk management process. This will reduce risks for teams on the ground and help educate all those involved in deploying to future conflicts.

Of course, the personal protective equipment (PPE) our teams are wearing has saved their lives. There is often a reluctance among journalists to wear and lug around heavy body armour, but in our experience in Ukraine, and other recent conflicts, using PPE can often be the difference between being alive and dead.  We also ensure that our drivers, fixers and local producers had the same level and quality of body armour as our own teams. Anyone asked to take the same risks should be given the same level of protection, no excuses.

Those involved in incidents in Ukraine emphasised the confidence it gave them to operate effectively, knowing they were protected as much as possible. The team that was ambushed on 28 February served as a stark reminder about why we use PPE and the value of having the right kind of protective equipment for the situation. Without it, they may not have been here today.

This war in Ukraine is likely to be a drawn out. It is highly probable that more journalists will be injured and killed. This is the brutal reality of covering war, however, these risks can be reduced drastically. What security managers can and should do is provide handrails, not fences, seek engagement over compliance and educate their teams to increase their competence. We all know journalists want to do their job. They wouldn’t have it any other way. We may as well help them to do it safely.

Read a summary of Mark's thesis here and download the full thesis here.

Dr Mark Grant is the Head of High Risk, Safety, and Security at Sky News. Mark has operated in high-risk environments around the world and has previously supported and managed security for the BBC and CNN. He holds a master’s degree and a professional doctorate in security risk management, with a specific focus on journalism security.  Mark is also a co-founder and non-executive of MiRiskMedia – an app-based solution providing news organisations and freelancers with direct access to vetted, qualified and experienced safety and security advisors.