News > It is toxic for society when crime goes unpunished

It is toxic for society when crime goes unpunished 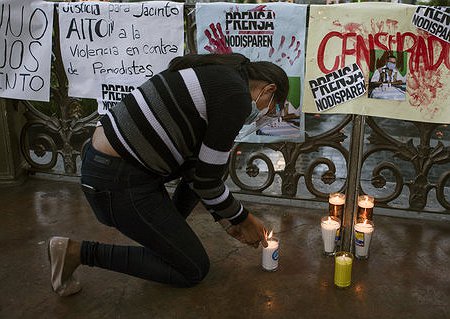 In nine cases out of ten, around the world, a person who kills a journalist is not punished. In Sweden, many journalists lack confidence in the capacity of the legal system to deal with hate and threats targeting them. When crime goes unpunished, serious boundaries of thought are shifted.

This has far-reaching consequences, writes Cilla Benkö, Director General of Swedish Radio, on International Day to End Impunity for Crimes Against Journalists.

UNESCO’s website keeps a continuous tally. Name after name is added to a grisly list, 45 so far this year. On 10 October, television reporter Shahid Zehri was killed by a car bomb in Pakistan. On 28 September, journalist Manuel González Reyes was shot dead in Cuernavaca in Mexico, the seventh journalist to be killed in the country this year. On 3 June, news anchor Mina Khairi was killed in Kabul, the fifth female Afghan journalist so far in 2021.

Collectively, the journalists on the list illustrate the most serious consequences and the ultimate sacrifice made in the name of freedom of expression. It is important to name their names and acknowledge their efforts. But just as important is the prosecution and punishment of the perpetrators behind their deaths. This is very much not the case today. In the last decade, on average one journalist was killed every four days, and in nine out of ten cases the perpetrator went free, according to UNESCO.

And it’s not just journalists’ deaths that go unpunished or remain uninvestigated. This applies to most crimes against journalists: intimidation, harassment or acts of violence. This very fact affects confidence in the law’s ability to safeguard journalists’ interests. According to a study from Lund University and Halmstad University*, at the turn of the year, more than half of surveyed members of the Swedish Union of Journalists stated they believe the legal system has very poor or rather poor powers in this area. This is truly a shocking result in a country like Sweden, with its long legislative traditions of freedom of the press and freedom of expression.

Quite apart from the tragic consequences at an individual level, this lack of trust also has other serious consequences for society as a whole. This can come in the form of self-censorship – journalists choosing not to cover certain areas or topics – and the risk of the profession in general becoming less attractive. The lack of legal consequences also risks feeding the idea, which exists as part of the current social climate, that journalists are ‘the enemy’, the bad guys, with their own agendas and spreaders of ‘fake news’. This narrative dehumanises an entire profession, and in tandem with impunity forms a toxic cocktail that can have serious consequences.

At Swedish Radio, we ask our employees to report all threats and repeated harassment – something that the Swedish Police also encourage. It sends an important signal, and provides statistics on the situation as it is. According to the survey conducted by Lund and Halmstad Universities, a large proportion of Swedish journalists stated that they had been the victim of threats and hate in the last three years in the form of criminal insult (70%) or slander (40%). Almost one quarter (23%) stated that they had been harassed and targeted by unlawful threats. Women journalists are more often victims of sexual harassment compared with their male colleagues, and journalists with foreign backgrounds are more often victims of hate and threats.

Investigative journalism, where journalists work on stories that some do not want to see the light of day, is of course an area where such threats are particularly common. Earlier last autumn, a female animal rights activist who was charged with unlawful threats against Göteborgs-Posten’s reporter Michael Verdicchio was acquitted. The threat in question, which was particularly grave and posted in a comment box on Facebook, is one of the few that has actually led to prosecution. This is why it is easy to understand Verdicchio’s downcast comment to the magazine Journalisten in connection with the acquittal: “I interpret this judgement as saying that it is OK to threaten to kill journalists”. I hope that the Swedish Government’s ongoing inquiry** into toughening the penalties for crimes targeting journalists can provide the tools that the police and prosecutors need to be able to pursue these crimes. This inquiry is a step in the right direction and there are also bright spots on the international front.  At the end of September, President of the European Commission Ursula von der Leyen highlighted media freedom as a decisive issue for the future at the opening of the European Parliament. The following day, the European Commission presented a Recommendation to Member States on strengthening the safety of journalists for the first time ever. The Nobel Peace Prize this year, announced in October, was awarded to two journalists: Maria Ressa from the Philippines and Dmitry Muratov from Russia “for their efforts to safeguard freedom of expression, which is a precondition for democracy and lasting peace”.

We see you and we hear you. We should all stand up for you.


Cilla Benkö is the Director-General and CEO of Swedish Radio.

This op-ed was originally published in the Swedish newspaper Dagens Nyheter´s web on 1 November 2021 https://www.dn.se/kultur/cilla-benko-giftigt-for-samhallsutvecklingen-nar-brott-inte-straffas/