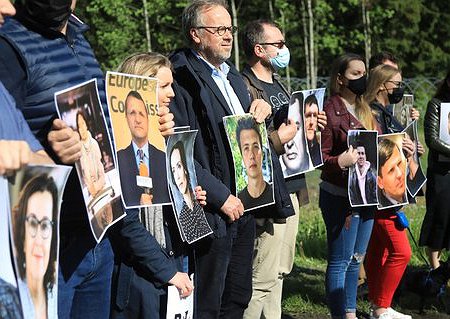 On September 16, for the first time ever, the European Commission presented a Recommendation to member states on strengthening the safety of journalists, both online and in everyday life. This is a step in the right direction, writes Cilla Benkö, Director-General and CEO of Swedish Radio.

Journalists being able to do their jobs freely and safely is crucial in a democracy. But unfortunately in recent years, media freedom has increasingly come under fire in the world, in Europe, and in Sweden. According to the Reporters Without Borders 2021 World Press Freedom Index journalism is completely or partially blocked in 132 out of the 180 countries surveyed. Never before have so few countries in the world been classed as having good press freedom.

From Afghanistan come hair-raising reports of journalists being arrested, beaten, silenced and risking their lives in the wake of the Taliban’s assumption of power. But there are also big problems in Europe too. In Belarus, freedom of speech is stifled by strict media laws, while individual journalists are subjected to threats and intimidation, violence and imprisonment. Only this summer, Dutch criminal journalist Peter R. de Vries was openly murdered in the street in Amsterdam and, according to Reporters Without Borders, the number of acts of violence against journalists in Europe and in the Balkans has more than doubled in the last year. In addition, the COVID-19 pandemic has further hampered journalists’ work, both in terms of access to information and fewer job opportunities.

In my role as representing a major media company like Swedish Radio, an issue I regularly raise is the responsibility of leading politicians to stand up for media freedom – through legislation and concrete interventions, but also to draw attention to the issue as a whole. In recent years, too many politicians have instead loudly criticised the media and pointed out journalists as enemies.

It was therefore promising for many reasons to hear that, in her 2021 speech on the State of the Union on 15 September, the President of the European Commission, Ursula von der Leyen, specifically highlighted media freedom as a crucial issue: “Information is a public good. We must protect those who create transparency – the journalists,” she said, stressing that the Commission was presenting today its first-ever recommendation to strengthen the safety of journalists and other media professionals. An important and clear signal.

The Recommendation, which is not legislative but rather provides guidelines on how member states ought to proceed with this work, was presented by the European Commission’s Vice-President Věra Jourová on 16 September, and is being promoted as an initiative by the Commission to reverse the negative trend in media freedom in the EU – where “more than 900 journalists and other media professionals were attacked in the EU last year”.

In brief, the Recommendation states that:

Věra Jourová, who stressed that now ‘is the first time that we put media freedom and safety so high on the European agenda’, also called on member states to act and promised vigorous monitoring of these measures and follow up after 18 months. A focus was placed on online violence, storms of hatred, directed at female journalists (an issue I have raised previously), on the problem of journalists being attacked during demonstrations, and on the problem with threats coming from leading politicians. It is good, more than good, that the Commission wants to give priority to the safety of journalists and independence of the media. The European Commission is also investigating the possibility of introducing protection for investigative journalists silenced by lawsuits – Strategic Lawsuits Against Public Participation (SLAPP). A report will be presented at the end of the year.  In parallel, work is under way in Sweden to strengthen the safety of journalists and media freedom in general.  As a result of the Recommendation of the European Commission, there is reason to feel some hope that the safety of journalists will be given more emphasis and will be higher on the agenda.

However, much work remains to be done before these issues are given the attention they truly deserve. And the reasons behind that attention are anything but gratifying.

The Recommendation in its entirety is available on the Commission's website: https://ec.europa.eu/commission/presscorner/detail/en/IP_21_4632

Cilla Benkö is Director-General and CEO of Swedish Radio & an INSI board member.